Just Cause 2: Rico returns to action in the sequel to Avalanche Studios' gargantuan action game. Just Cause 2 stars Rico Rodriquez, back to wreak havoc once again, this time with a new destination -- the huge playground of the South East Asian islands of Panau. The sequel features more stunts, vehicles and weapons than ever before and an incredible overhauled grappling hook system. Panau itself is an incredibly detailed and vast 1000 sq km game world of different climates and ultra-realistic weather effects. Leap from your plane and skydive from 10,000 feet down into a tropical jungle, tear across an arid desert in a dune buggy or climb your way up a snowy mountain in a 4x4. The vast open-ended, unique gameplay is back, allowing you full freedom once again to free roam and explore the massive world of Panau and tackle your assignments however you want.

Cheats and Trainer for Just Cause 2 (PC)

Command and Conquer 4: Tiberian Twilight - The year is 2062 and humanity is at the brink of extinction. With only six years left until the mysterious crystalline structure Tiberium renders the earth entirely uninhabitable, the two opposing factions -- Global Defense Initiative (GDI) and the Brotherhood of Nod -- inevitably find themselves in desperation for the same cause: to stop Tiberium from extinguishing mankind. The unthinkable becomes reality and Nod's enigmatic leader Kane takes off for GDI headquarters. What is Kane planning in the heart of his enemies' base?
In addition to the two campaigns on the epic battles of GDI and Nod, which players will get to conquer alone or in a cooperative mode, Command & Conquer 4 also features a new 5v5 objective-based multiplayer mode, promoting teamwork and cooperation and delivering a social real-time-strategy experience never seen before in a Command & Conquer game.
Cheats and Trainer for Command and Conquer 4 (PC) 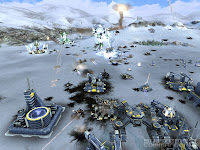 Experience brutal battles on a massive scale! In SUPREME COMMANDER 2, developed by Gas Powered Games, players will wage war by creating enormous customizable armies and experimental war machines that can change the balance of power at any given moment. Take the role of one of the three enigmatic commanders, each representing a unique faction with a rich story that brings a new level of emotional connection to the RTS genre, or fight the battle online. Where do your loyalties lie?
Set 25 years after the end of the Infinite War, SUPREME COMMANDER 2 starts with the galaxy reeling from the recent assassination of the newly elected president of the fragile Colonial Defense Coalition. The members of the Coalition – the United Earth Federation, The Illuminate and the Cybran Nation –blame each other, and the early rumbles of war can be heard throughout the galaxy.
Cheats and Trainer for Supreme Commander 2 (PC)

Metro 2033: The Last Refuge: Year 2033. Horrible Post-Apocalyptic world of 40000 people. They have been living in metro of a big ex-USSR city – Moscow, for 20 terrible years. Nuclear war destroyed their homeland. These people are the last representatives of mankind - human cycle of evolution nears its end, new species (very ugly) appear on the surface of the Earth and deep inside of metro. Some people inside the metro still remember happy years before THAT DAY and they still believe that one day they will return up to the surface. What’s present is a very heavy psychological atmosphere: small children who will never see sky, old people who still remember the PAST times, and young men and women who fight for their world, for their children. Each station became a country, with its government, army, borders and many other things from the past. Firearms cartridges serve as currency. This small dying world is a precise copy of the past big world. Do these humans have future or we are doomed for extinction? Maybe answers can be found on the surface, or in deep secret military underground laboratories. Who knows?